# Adventure with the Astromons!
Collect over 550 types of Astromon in Monster Super League!
Catch wild Astromons out there in the field, or summon them by hatching the mysterious eggs!
Collect & evolve your favorite Astromons!

# Immersive Content!
Dive deep into the story of Astromons through 8 different regions!
Challenge yourself in daily Dungeons for better rewards!
Battle against other players in the Astromon League!

NOTE: This game is available on iOS and Andriod but I only have the Android version. This review reflects my experience with the Android app only.

Besides Final Fantasy: Record Keeper and Fantasy War Tactics (review pending), Monster Super League (or MSL) is among my longest played mobile games to date. I actually believe I was searching Pokemon or Pokemon-esque games and this one popped up. I was so obsessed with the artwork that I immediately downloaded it. I am not going to pretend I am not an art snob when it comes to games…

This game has great graphics and runs smoothly. There are multiple areas to play besides the main campaign without being overwhelming. The RNG can be as frustrating as it is rewarding but the grind doesn’t feel like a chore.

The Wiki is a major help! Definitely check it out. 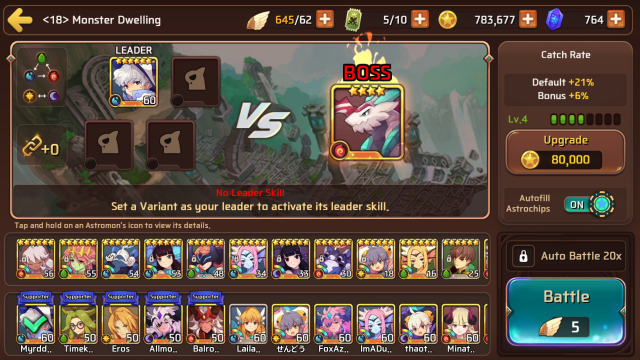 Been stuck on this beast for weeks…

I can understand that the con list may make the reader question my rating, but I stand beside it. Despite the list, the cons do not outweigh the pros and have not detracted from my enjoyment of the game. The only thing that honestly burns me up the neverending need for gold and the AI’s period bouts of stupidity that ruin runs for me.

Disclaimer: As always, my reviews are purely my opinion and are not influenced by any outside factors. I am not paid/bribed/etc. to write them. I just enjoy writing reviews.