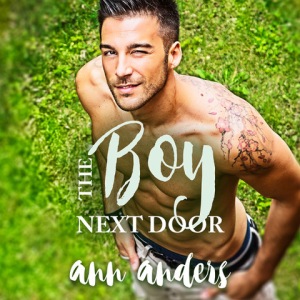 Penny never intended watching her new neighbor, but the window is right there. And, damn, those abs, that chest! Camo pants worn like that ought to be illegal. He’s way out of her league. And so young! But a girl can look, right? Ever since the divorce, she’s just felt so… invisible.

Military pilots get almost any woman they want. So when Penny tells Chaz he’s too young for her, he can’t help but take a second look. She’s not his usual type. She’s sassy, she’s earthy. She’s real. Hell, if she doesn’t do something for him.

A thirty-something divorcee and a twenty-something injured navel pilot fall head first into fate’s trap – a trap that lands them both in some serious sexual healing. And it’s good. It’s really good. Which leaves them both wondering. Can fate turn into love?

The Boy Next Door is a delightful second chance at love novel. Penny is your average middle-aged woman just wanting to feel wanted while Chaz is trying to heal both physically and mentally from a military tour. Penny is so relatable, it’s not even funny. From her eating habits to trying to decide if she’s appropriately dressed/groomed to go to the grocery store, Penny is a protagonist who feels real.

The heat between Chaz and her is also tangible. Their chemistry and unforced, their dialogue as humorous and it is hot. While Penny’s depression is understandable, Chaz’s insightful realism is both refreshing and eye-opening. They felt compatible and, honestly, good for each other.
Short but packed with depth, The Boy Next Door is a perfect read when you want a romance but don’t have the time. Anders has an easy style that will have the reader flying through the pages.