Review: An Earl for the Archeress by E. Elizabeth Watson

An Earl for the Archeress

Desperate for coin, Lady Mariel Crawford enters an archery contest as a boy but despite her unmatched

skill she loses in a tie to the intriguing, frustrating, and very handsome Earl of Huntington. Robert of Huntington seems like any other young philanderer and Mariel, fleeing a cruel father, trusts no man. Yet Robert proves to have a softer side that threatens her resolve to remain alone and unattached.

When Robert bests a young woman at a tourney, his curiosity deepens when he realizes she is the daughter of the ruthless Beast of Ayr. And when he learns that Mariel’s father conspires with the Sheriff of Nottingham Robert is compelled to protect her. Even if it means lying. Even if it means the only way he can save her is by marrying her. He’s willing to lose everything to guard the Scottish wildling who has pierced his heart. 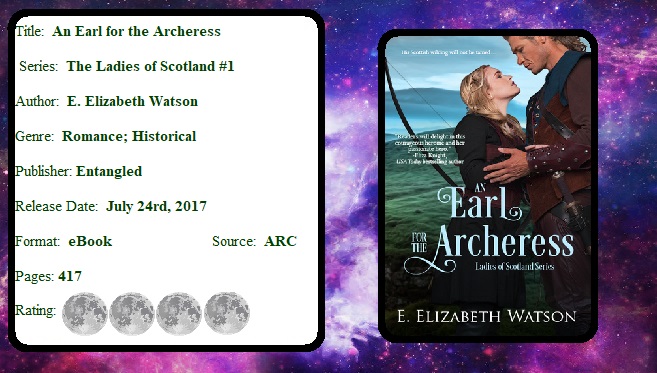 What a lovely read. I like strong female characters, but I love strong female leads with visible flaws. Mariel is clever, resourceful, a great archeress…and absolutely terrified of her father which she is very open about to Robert. It was refreshing to read and made Mariel all that more endearing despite her also trying to prove repeatedly that she can “take care of herself.” Yes, that age old trope.

That being said, there are few men worthy of her, but Robert is definitely one of them. Faced with obstacles on all sides, Robert handles them all with ease and dignity all while trying to protect Mariel and not fall for her.

Historical romance can be hit or miss. With so many of them out there, it can be overwhelming to weed out the good ones. AEftA is great read worth your time. While not an original plotline, Watson’s breathes life into it fueled by dynamic characters and a powerful love story you can’t help but root for.

E. Elizabeth Watson writes historical romance and lives on a mountain in West Virginia with her sons, husband, and various pets. With degrees in Archaeology and Anthropology, Elizabeth instead began pursuing a career in fiction writing after earning an Honorable Mention in the 2013 Texas Observer short story completion, and making it to the quarter-finals in the 2014 Amazon

Breakthrough Novel Award contest. Prince of Lions, was published in January of 2016, and Son of Ballymead, the sequel, followed in February 2017. One Scottish Knight, her first novella, was released at the end of April, 2017. Her first two traditionally published novels, An Earl for the Archeress, and Maiden’s Defender, will be published by Entangled July 2017 and November 2017.