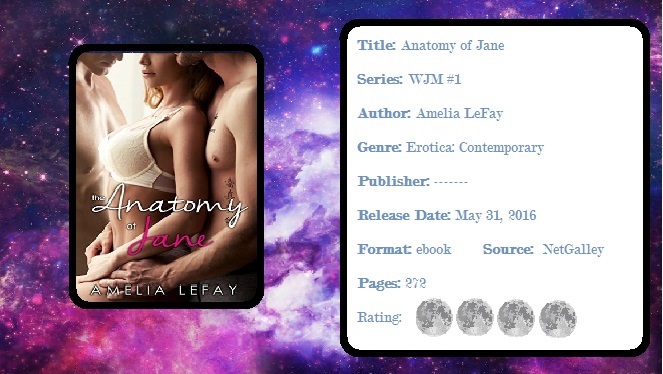 I’ve always been on my own. My life used to consist of nothing but work, keeping Allen out of trouble, and if I had time, sleep. Then I became their maid.

Every day more than half a million people tune in to watch my show. They trust me. I know it’s because I’m the only son of the prominent Emerson family. However, I like to believe it because I’m honest no matter what story I report on. I’m honest about everything but the man I’ve been f**king for the last four years… and now her.

I want three things: First, Maxwell Emerson and Jane Chapman both in my bed. Second, to be the best bloody chef in the country. Third, to figure out how to simultaneously get the first and second things I want without any of us getting hurt.

I received a complimentary copy in exchange for an honest review.

I am not sure how to go about this review. On one hand, there was so much about this novel to love. The characters are great! They tangible with flaws and quirks and it is so hard not to care about them. This is a novel that is written so well and flows so nicely that as I was reading, it turned into a movie inside my head where I could almost hear their voices. Needless to say, I was taken in.

Don’t expect this be a light erotic read, however. First off, there is a lot of sexual tension built up. I had to fan myself a couple times reading it. When it came down to them actually doing the deed, it felt a bit anticlimactic, no pun intended. I expected this greatly detailed beautiful described scene. Rather, it felt more like a wham-bam-thank you-ma’am kind of deal. It was disappointing after such tantalizing build up and foreplay. Secondly, there is a lot of emotion and drama involved. If you like your erotica simple and fun, avoid this novel because it grabs you by the heartstrings and doesn’t let go even after you’ve long since read the final page.

I would also avoid if you don’t like cliffhangers. The author left then end of this wide open, clearly preparing for the second novel (which has yet to be released as I write this). Since I received a copy from Netgalley, I didn’t pay too much attention that this was part of a series until it was over, and I felt like my heart was ripped from my chest.