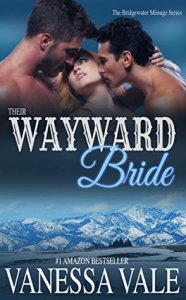 When Laurel Sinclair’s uncaring father seeks to pawn her off in marriage as part of a business deal, she seeks to avoid her fate by fleeing. But running away in a Montana blizzard proves to be a terrible mistake.

When handsome ranchers Mason and Brody find the stranded redhead next to her injured horse, they take her in and immediately decide to make her theirs, convinced they can convert the beautiful stranger to an unusual arrangement of marrying them both.

The Bridgewater way of one woman marryingtwo husbands is foreign to Laurel, but she soon grows to love the two protective men who awaken her to a world of carnal pleasures she never knew existed. She grows to love them for their guidance and protection.

But will her happiness be threatened by the secret she harbors?Will Mason and Brody still love her if they discover who she is? And what will happen when her scheming father and the cruel man he wanted her to marry finally track her down?

Novels like this just burn me up. I feel like I shouldn’t be upset because I got the book for nothing. But there is an entire series of this garbage. Normally I wouldn’t be so hard, but this novel is an example of everything I hate about what is supposed to be romantic/erotic literature.

First off, there is no development of any kind. There is no description of setting beyond that it’s Montana Territory. There isn’t even enough description to decipher what time period it’s in. This would be forgivable if the erotic scenes were worth it, but they fall short of rape. Pretty much this man finds a woman out in a snowstorm, brings her home, then him and his friend decide that she belongs to them and they molest her regardless of how uncomfortable she is. I should have known this was going to be a terrible book when her rescuer takes time to focus on her “lush breasts” as he is rescuing her! Not to mention there is no relationship developed between her and the two men. They literally decide she belongs to them the moment they get her naked while she is hypothermic then proceed to molest her every chance they get. They also visit their neighbors with her wearing only a shirt of theirs.

Seriously. Garbage. Especially since this is one of those novels where the men “know what’s best for the women”, so even if the women don’t like, they put up with it anyway. I have a feeling this is supposed to be set in the 1800s, but thinking like that just makes me nauseous. Oh you don’t want a plug shove up your bottom? Well too bad because you’re a woman and you don’t get a say in what happens to your body! That pill would have been easier to swallow if I didn’t have to read on every. single. page that the men “take care of their women.”

Gag me, please. This is probably the angriest review I have ever written. If I could give it negative stars I would. Absolute trash. Don’t waste your time. And certainly don’t encourage this.