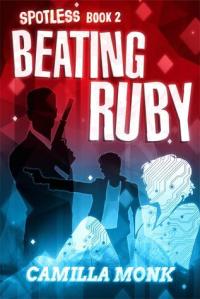 Life hasn’t been quite the same for computer engineer Island Chaptal since March, an OCD-ridden professional killer, burst into her life to clean her bedroom and take her on a global chase for a legendary diamond. Sadly, the (hit) man doesn’t just break bones; he breaks hearts, too.

Since then, Island has found solace in Alex—the perfect boyfriend—and Ruby, a software project about to revolutionize online banking security…for the worse. When Island’s boss is found dead after allegedly using Ruby to steal a vast fortune, it’s up to her to clear his name and recover the money. Someone else wants answers, though, and this time, Island might be in over her head.

From New York to Zürich, it’s going to take the return of a cleaning expert, a mini-octopus, and Island’s wits to beat Ruby. All while deciding whether to trust a man who already jilted her, or one who may have his own deadly secrets…

I received an ARC from the author in exchange for an honest review.

I have been putting off this review for a long time because once I write it, I must accept that I have finished the novel and the wait for book 3 begins.  If I loved Spotless, I don’t think there are words for how I feel about Beating Ruby. I don’t think I could love this series more if I tried. It is utter perfection in every way and has everything you could ever want in a novel whether that be action, romance, or humor. Monk (and her leading lady Island) has a unique voice that gives her life all her own. I didn’t think it was possible for an author to fit so much personality into a fictional character, but I feel as if Island and I are old friends, that she is flesh and blood instead of words on paper. Not to mention she is far more relatable than the plethora of heroines I read about.

I will be honest and say that Beating Ruby was a bit hard to get into. Mainly because, like Island, I was still too hung up on March to give Alex, or the plotline itself, a chance. I am so glad I hung in there though. Monk likes to torture her readers with what ifs and maybes, but at least in the instance, she wasn’t a complete sadist.

While I enjoyed Spotless, I definitely feel that Beating Ruby surpassed the bar its prequel raised. It still had the same sassy humor and brains that Spotless had. However, I feel Beating Ruby brought more emotions that Spotless just didn’t touch. Of course, there was plenty of leftover turmoil from secrets revealed in Spotless to fuel the emotional fire as well as questions that still needed answers.

Again, Monk ends her sequel with what I would consider a cliffhanger. I should be furious that I have to suffer yet again until she graces us with the third in the series. However, I think I can forgive her since Beating Ruby surpassed its predecessor. Even if the third is only half as good as the first two, I will content.