Book Tour & Review: Chance of a Lifetime by Marissa Clarke

Sometimes the biggest risk is playing it safe…

Gen Richards is tired of living down to her family’s expectation of the helpless blind girl. Resurrecting her high-school bucket list that begins with “kiss a total stranger” seems just the thing until she finds herself in a panty-melting lip lock with her big brother’s best friend.

Chance Anderson thrives on adrenaline, but Genny’s the one risk he’s not willing to take. His recklessness a decade ago landed her in the hospital and ejected him from her life. He’s bad for her and everyone knows it—especially her big brother.

Chance reluctantly helps Gen complete her bucket list in order to keep her out of trouble. Running through a freezing fountain, playing Spin the Bottle while fending off a mad horde of stinging insects, and skinny dipping with homicidal attack swans don’t hold a candle to the real danger: falling for the one person he can never have. 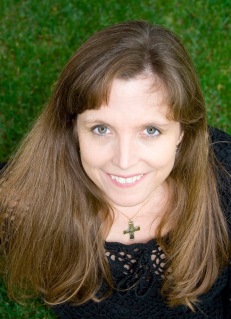 Marissa Clarke lives in Texas, where everything is bigger, especially the mosquitoes.

When not writing, she wrangles her rowdy pack of three teens, husband, and a Cairn Terrier named Annabel, who rules the house (and Marissa’s heart) with an iron paw.

Currently, she serves as Vice-President of Programming for the West Houston RWA Chapter, and is a founding member of Houston YA/MG Writers, and the QueryTracker.net Blog.

She loves to connect with readers, so follow/friend her on Facebook and, or shoot her an email from her “Contact” page.

Marissa also writes young adult novels for Penguin USA under the name Mary Lindsey. She is represented by Kevan Lyon of the Marsal Lyon Literary Agency.

I received a complimentary copy in exchange for an honest review.

I was initially attracted to this novel because I couldn’t get over the bizarre cover. After reading the description, I knew this was a novel I had to read. Not only is a friends to lovers novel (my favorite trope), the female lead also has a disability (she is blind). The author does a great job about not harping on this despite it being a major plot point.

First off, the couple is absolutely amazing together. The love between them was easily felt. They are just so perfect together that it’s impossible to argue otherwise. Any conflict between them was solve quickly in an adult fashion. It was so refreshing reading about characters who actually acted their age and behaved accordingly.

I couldn’t have asked for a better book. The bucket list aspect was cute and progressed the story without feeling forced and the characters were amazing. I will definitely have to hunt down the first two in the series.

One Comment on “Book Tour & Review: Chance of a Lifetime by Marissa Clarke”