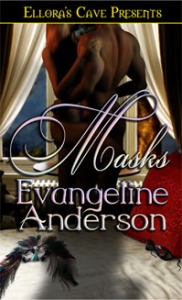 Shy, retiring Chloe has no idea how to go about dominating anyone. But that won’t be a problem for long because the “client,” Mark Jacobs, is a hot alpha male in a black leather mask of his own who prefers to take the lead when it comes to sex.

Soon Chloe is breaking all the rules for one night of forbidden passion but when she decides to take off her mask and asks Mark to do the same, she has no idea that the black leather he wears conceals a dark secret that may change her life forever.

I know I recently did a review for another one of Anderson’s novel, but I was able to download this for free and it was a quick read.

I still don’t know how I feel about this novel. I felt like the sex scenes in Claimed were much hotter, but Masks didn’t lack heat. However, she jumped into bed with him so quickly that it made my head spin. I am not saying anything against quick, anonymous sex, but it seemed out of character for her. The author spends so many pages enforcing what a mouse she was, and then she has sex with him almost immediately. Honestly, I skipped most of the beginning because it was just Zoe and Chloe interacting, and it wasn’t very interesting, nor progressive to the storyline. Not to mention I was annoyed with Zoe. She is a horrible sister and I would be furious with her.

All in all, it wasn’t terrible. It came nowhere near the level that Claimed was. Like I said, it was a quick read with a realistic ending that I appreciated.