Review: Thief with No Shadow by Emily Gee 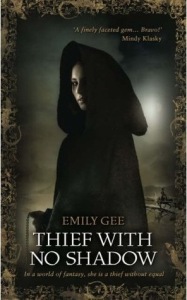 Melke is a wraith, which means she has the abilty to walk unseen. After being forced to steal a necklace, she is hunted down by the victim of the crime, Bastian sal Vere. He explains that the necklace was strung with tears, and that without it, Bastian cannot break the curse that is destroying his family. He orders Melke to regain the necklace, in exchange for her brother to be healed. But she had given the necklace to the salamanders, the fire breathing creatures that live underground. She must risk her own life. Meanwhile, Bastian becomes involved in solving a brutal murder of a young pregnant girl in the town of Theirry.

This is a strong character-based fantasy, full of romantic tension and gritty storylines.

I can understand why some other readers gave this such a low rating, but I enjoyed the book. It was slower paced than other books I have read but I finished it rather quickly. Each passage served some purpose, whether it was building the world, progressing the story, or familiarizing the reader with the characters. The characters had more self-loathing than I have ever read in any book, but it was understandable considering what they have been through. I don’t think some of the reviewers actually understand how the human mind works. With what these people have had to deal with in their life, they are actually well-adapted.  Very well-adapted.

There is also a lot of sex in this book for what I expected. And half of it is interspecies. I appreciate that the author had the decency not to describe one of the scenes but I could have done without the other. I agree there definitely should be a warning about them. Nowhere does it state that there are graphic scenes of that nature.

Overall, I really enjoyed the book. I loved the mythology. The plot wasn’t overly complicated but it kept me interested even through the slow parts. But mainly, I was so invested in the characters having their happy endings that I couldn’t put the book down. However, I can definitely tell why it’s not for everyone.